30th July 2015 declared as a holiday by the TN Govt. Government of Tamil Nadu announced Holiday on 30th July 2015 as a mark of respect for late former president Dr.APJ Abdul Kalam. Holiday will be observed through out Tamilnadu on the 30.07.2015 for Schools, Colleges, Educational Institutions, Govt Offices. All shops in Tamilnadu will remain closed on the 30.07.2015. It would be holiday for all educational institutions, government and private establishments on Thursday under the Negotiable Instruments Act, 1881.


The last rites of Kalam would be held at his native place Rameswaram on July 30 (Thursday). Government of India has announced a seven-day state mourning in honor of former President APJ Abdul Kalam, however there will be NO holiday. “As a mark of respect to the departed dignitary, seven days of state mourning will be observed throughout India from 27th July 2015 to 2nd August 2015 both days inclusive” an official statement said. Bihar Agricultural University (Kishanganj) renamed Dr Kalam Agricultural University as a tribute to the former President from Bihar government. HRD Minister Smriti Irani has announced that Rashtriya Avishkar Abhiyan to be renamed as APJ Abdul Kalam Rashtriya Avishkar Abhiyan. 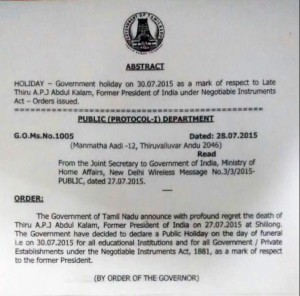